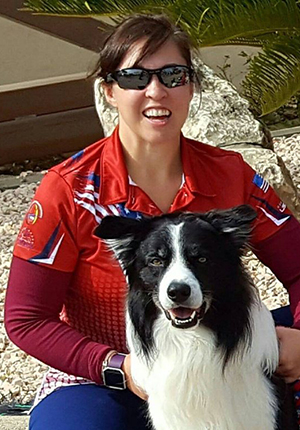 Appointment Request
Send Us a Message

Ever since she was about five years old, Dr. Maria Badamo always knew what she wanted to be when she grew up – a Veterinarian. Even when times were rough and this goal seemed unattainable, there was always a force driving her towards this goal.

Dr. Badamo is originally from Long Island, NY, where she worked at a local animal shelter for three years, prior to starting her college education. She completed her undergraduate degree in Biology at Arcadia University in Philadelphia, Pennsylvania. In between studies, she obtained a dog training certification in Jacksonville, Florida.

After obtaining her veterinary degree, Dr. Badamo completed a rotating internship in small animal medicine and surgery at a well-known specialty practice - Red Bank Veterinary Hospital - in New Jersey. She stayed on as a general practitioner for two and a half years before accepting a position at Metro Paws Animal Hospital.

Dr. Badamo actively competes in canine agility with both Kenobi and Klick (be sure to subscribe to her YouTube page to see the amazing accomplishments that Dr. Badamo and her pups have achieved)! She and her two dogs Gromit and Kenobi have competed on multiple international agility teams, representing the USA. Competing in the sport of canine agility has further strengthened and developed her interests in canine sports medicine and rehabilitation.

Dr. Badamo’s interests outside of veterinary Medicine include photography (mostly photos of her dogs), jogging/hiking (most of the time with her dogs), and canine agility. Her main goal in life is to follow her heart in life and in love. Her philosophy in veterinary medicine is to treat each patient as she would treat her own pets.